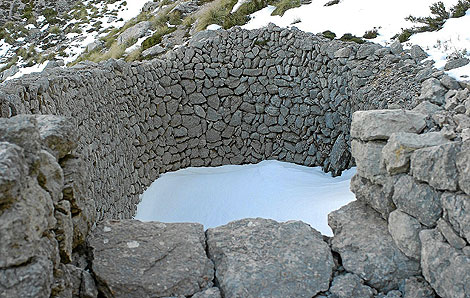 Can Joan de s’Aigo has become as a symbol of the Mallorcan spirit since its founding in 1700. Few people know that the origin was in the sale of water obtained from the “cases de neu” of the Sierra de Tramontana, the trade of which was even regulated by the government.

Whoever visits Can Joan de s’Aigo says that standing in the queue is part of the ritual. Few people know, however, that more than 300 years ago the premises were already packed by locals when C’an Joan was a branch of the “cases de neu”.

Their well-known “cuartos” and chocolate are just the tip of the iceberg in the history of Can Joan de s’Aigo.

Who has not asked themselves where the “aigo” in his name comes from? In order to find out we have to go back to the 1700s.

An article by Laure Jurado, from the newspaper B@Leopolis-el mundo.es

You can find out more about which cookies we are using or switch them off in settings.

This website uses cookies so that we can provide you with the best user experience possible. Cookie information is stored in your browser and performs functions such as recognising you when you return to our website and helping our team to understand which sections of the website you find most interesting and useful.

Strictly Necessary Cookie should be enabled at all times so that we can save your preferences for cookie settings.

This website uses Google Analytics to collect anonymous information such as the number of visitors to the site, and the most popular pages.

Please enable Strictly Necessary Cookies first so that we can save your preferences!